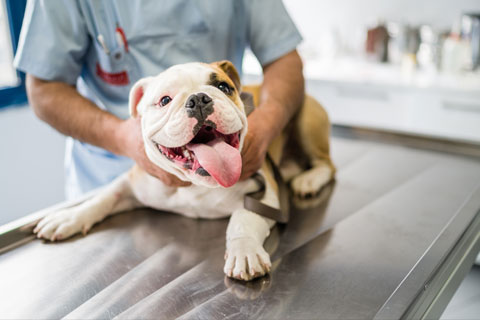 What is Cushing’s Disease?

This condition results from increase production of cortisol from the adrenal glands. As many older dogs exhibit some of these symptoms, Cushing’s disease is often being considered as a possible diagnosis for our patients.

Typically there is a step wise progression of exam and testing that leads to the diagnosis of Cushing’s disease. In the early stages of diagnosis for Cushing’s disease; patient history, exam findings, and basic blood and urine results are used to determine if more specific tests should be completed.

The following are five findings that would point toward a patient having Cushing’s disease.

The first finding is called a stress leukogram. This refers to the interpretation of the complete blood count. The complete blood count known as a CBC is part of most basic blood panels. This is the counting of white and red blood cells as well as platelets. Typically patients with Cushing’s disease will have lower than normal lymphocyte counts and higher than normal platelets counts.

The second finding will be elevated liver enzymes. The liver enzyme alkaline phosphatase (AP) is produced primarily in the liver. But when cortisol levels increase, the cortisol induces the AP to become higher. And this increase in AP is found in about 90% of patients with Cushing’s disease.

The third finding is mild elevation in blood glucose known as hyperglycemia. Cortisol increases the production of glucose from the liver and also blunts the effect of insulin in some patients. About 35% of patients with Cushing’s disease will have hyperglycemia.

The final finding is the presence of dilute urine. The increased level of cortisol interferes with the kidney, and the kidney is no longer able to save water. This inability of the kidney to reabsorb water leads to water loss in the urine; and the need to drink more water to replace the water that is being lost. This occurs in 90% of patients with this disease.

If your elderly pet is panting, has hair loss, and is drinking and urinating more than usual, then he or she could have Cushing’s disease. Start by letting your veterinarian know of these symptoms and collecting samples for basic blood and urine tests.

If several of the above findings are present then specific testing for Cushing’s disease should be completed. This would include further blood testing and likely abdominal ultrasound.

If Cushing’s disease is diagnosed then treatment should be considered. This disease is not cured, but managed, and can require intensive monitoring. Having said that, in the right cases, very satisfying results can be accomplished by the veterinarian and client working together.