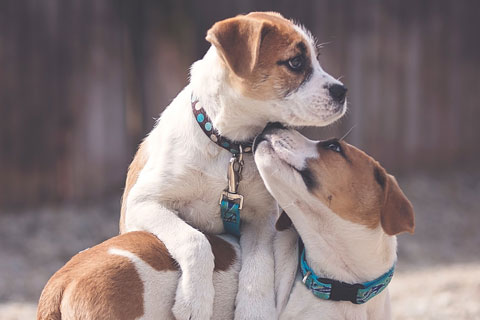 Thank you for clicking the link in People.com to learn more about this and other dog and pet behavioral topics!  We want to note that we do not know all the facts of the unfortunate situation relayed by People.com so please keep in mind that the incident may or may not have been caused by littermate syndrome and that our understanding of animal behaviors is always evolving. Use our Ask a Trainer articles as a general reference but, more importantly, find a vet and trainer that you trust and follow their guidance. Also, Adopt, Don’t Shop and have a great day!

As mentioned in our “Picking a Puppy” article, littermate syndrome is a serious behavioral condition. The condition develops when two young dogs end up bonding too tightly with each other. It may sound ideal when dogs are such close friends, but major issues can arise down the road. The problem is that their relationship with each other can stop them from creating proper bonds with humans and hinder their social development. As the name suggests, littermate syndrome generally exists in two puppies from the same litter, however it can also be present when two puppies of a similar age are raised together. Although littermate syndrome doesn’t develop every time two puppies are raised together, it is common enough that we warn against getting two puppies at the same time.

From a young age, the two puppies have formed a very strong bond, learning and feeding off of each others emotions. This can lead to behavioral issues in one or both of the dogs as they develop, these behaviors often include:

Fear of people and other dogs

These issues aren’t often experienced right away, but as both dogs reach mental maturity, they tend to intensify greatly. Littermate syndrome often causes aggression in breeds that are not prone to aggressive behaviors. For example, we rarely see aggression in Labradors, but when two Labrador littermates are raised together we see much higher levels of aggression and or fear.

Littermate syndrome can be managed, but it is a lot of work.  An owner should know that preventing littermate syndrome doesn’t just double their workload, but rather triples it. They’ll have to train with each dog individually, and then together. Remember that littermate syndrome is not a dog simply acting out. Littermate syndrome causes dogs to not go through their normal developmental process and takes a huge amount of work to overcome once it is present. At that point you aren’t simply asking a dog not to be bad, you are trying to socialize them long after their “socialization window” has closed. It is hard work!

The easiest way to prevent littermate syndrome is to only take one puppy at a time.  It is always tempting to take two because they are just so darn cute together.  But no matter how cute they are the safer route will always be to just take one.  If you want a second dog, I would suggest waiting 6 months and then getting another puppy.  This way the first dog will have already been socialized properly.

If you already have two puppies and you are intent on keeping them together then you will need a great action plan! The main things you’ll want to achieve is confidence in the dogs when they are separated from each other and good behavior when together.  Believe it or not, the most important work occurs when the dogs are separated.  To some people this sounds backwards because they want the dogs to be good around each other, but proper socialization is the most important part!  Here are some things to work on:

When you crate the dogs make sure that you utilize an individual crate for each dog and never crate them together. You can start off with the crates right next to each other to ease the separation anxiety.  If the dogs do well, you should slowly start moving the crates to opposite sides of the room and then to different areas of the house.  This will help the dogs start to feel independent.

Obedience train each dog without the other dog around. The goal is to ensure that each dog forms a strong individual bond with the owner. If attending obedience classes we recommend that you enroll each puppy in a different class.

Plan outings with each dog individually. Take the dogs to parks, pet stores, or any public place on their own!  The goal is to individually socialize each dog to new experiences while they are relying on the owner and not the other dog. You will want to individually expose each dog to anything that they might see when they are adults.  This includes; strollers, bikes, shopping carts, cars, trains, people with different characteristics (beards, glasses, hoodies, different skin colors, etc) and various types of dogs.

After we have started socializing and training each dog separately, we phase in some joint obedience sessions and socialization outings.  Here are some ideas of things to work on:

Take a walk where each dog has a different handler.  After walking together for a few moments, walk the dogs off in opposite directions and see how they react.  If they do not do well and are stressed, make sure to flag the behavior and create a training plan to fix it.

Train the dogs within sight of each other and practice moving in and out of sight.

Make sure the dogs can properly meet new dogs and people when they are together.  As mentioned above the littermates tend to feed off of each others energy.  So when meeting a new person or dog, any excitement or fear will be amplified by having the other littermate present.

It is important at this stage to continue some individual training/socialization trips as well as planning joint outings.

With hardwork, littermate syndrome can be prevented or remedied, but it is important to start early.  Also, remember that avoidance of this issue is the best plan.  Having two dogs of a similar age is great, just get them roughly six months apart and make life easier on you and them!